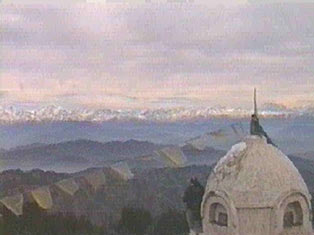 Himalayas from the summit of Pulchowki near Kathmandu

During the period 8th-24th January 1993, I took part in a commercial birding expedition to Nepal with 14 others, led by the well-known wildlife photographer, David Cottridge. I joined the party after a three-day stopover in Dubai, UAE, en-route from Riyadh, Saudi Arabia where I was previously employed.

The first full day (10th) was spent travelling to the top of the Hindu holy mountain, Pulchowki (2760m) which still has extensive tree cover unlike the rest of the hills in the Kathmandu Valley. At the summit there was still a small amount of snow and the temperature was fairly cold, birdlife seemed scarce but increased on descent, the most obvious species being the Black-capped Sibia, Chestnut-tailed Minla and several species of Yuhina.

On the 12th, the trip to Kosi Tappu was set back one day due to bad weather conditions around Biritnagar, our flight cancelled until the following day, however we managed a short period of birding at a temple called Swayambhunath, famous (or infamous!) for it's Rhesus Macaques. Birds were very scarce here but Slaty-blue Flycatcher, Greenish Warbler and a fine Peregrine were all recorded. 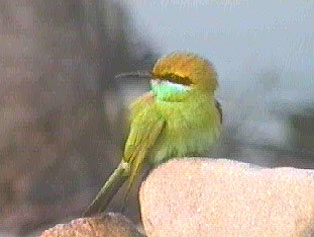 Our journey to Kosi Tappu began after a short period of birding at another temple, this time near the Airport at a site known as Pashupatinath. This area was good for Olive-backed Pipit, Blue-throated Barbet and Fire-breasted Flowerpecker. After the flight to Biritnagar we travelled by road along flat agricultural land to the Kosi Tappu Game Reserve near the Kosi Barrage, a major irrigation project. Here we camped in tents and spent three days studying large numbers of water and grassland birds. My own species total for the area was around 150 and this includes half of the period there being struck down with Kathmandu-quickstep. Highlights here included Baillon's Crake, Black-necked Stork, Red-necked Falcon, White-eyed Buzzard and a possible first for Nepal, Stub-tailed Warbler.

The following day was spent travelling by road to Chitwan, with many species being seen in the mainly agricultural areas, a nest of Lesser Adjutant found by the side of the highway, Indian Roller perched on telephone wires and above us, Crested Treeswift and Alpine Swift were in large numbers.

The first two nights in Chitwan were spent at Machan Wildlife Refuge, however all hopes of seeing Tiger were swiftly dashed when we were informed that 25,000 local people would enter the park the following day to partake in the annual cutting of the elephant-grass. The accomodation is well-placed within the Sal forest and bird waves pass through on occasion allowing easy birding and photographic possibilities, several species of Woodpecker, Nuthatch, Phylloscopus Warbler and Flycatcher were seen with ease as was Green-billed Malkoha and Jungle Owlet. Outside the camp on the forest trails Red-billed Magpies, Red-headed Trogon, and Pied Hornbill were seen, but views of the much sought-after Spot-bellied or Forest Eagle Owl were poor, as it took flight before we could get close. Whilst half the party were battling to see the latter bird, the remainder went for a boat-trip on the Rapti River and saw Great Thick-knee and Small Pratincole, which managed to be absent on the following morning! 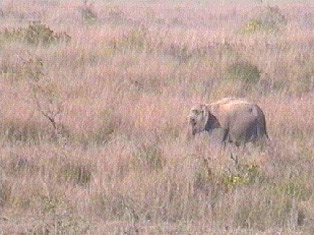 After Machan a morning was spent searching for Ibisbill at a well-known stake-out near Hetauda, only 5 birds were found, which worried BJ, our Nepalese guide who had been accustomed to seeing around one dozen on previous occasions. Human activity along the river is increasing, with the taking of aggregate for building being a possible reason for the birds decline. Later that afternoon (18th) we drove to Gaida Wildlife Camp and had reasonable views of a pair of Brown Fish Owl and Stork-billed Kingfisher along the river near the accomodation. The next day we travelled by elephant to a hilly area which was notable for Black-backed Forktail and Blue Whistling Thrush and were fortunate to see no less than 4 Red-headed Trogon, one of which I tried to film displaying only to find my camera was out of order after I'd fallen off the back of a pachyderm! In the morning I awoke to find an Indian Rhinoceros in the river very close to our chalets, it hung around for quite a while until it was scared off by grass-cutters.

From Gaida we travelled by road to Mugling and spent lunch in the company of Brown Dipper, Wallcreeper, White-crowned River Chat and Plumbeous Redstart by the fast-flowing Trisuli River. Later we were rewarded with our first and only magnificent Crested Kingfisher.

Back in Kathmandu from the 21st, we spent a further day at Pulchowki and Godaveri Fish-Farm, here we came across delights such as Hodgson's Redstart, Grey Bushchat and Grey Treepie whilst up the mountain we were lucky with Dark-breasted Rosefinch, Plain-backed Mountain and Chestnut-bellied Rock Thrush. Unfortunately I had a close encounter with a tick (on an unmentionable part) and other participants also were host to these parasites but on less critical areas. 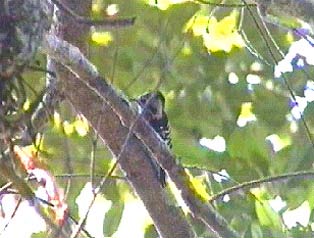 On the 22nd we took a half-day for shopping but spent the morning at Godaveri Fish-Farm and Botanic Gardens, species here included Grey-bellied Plaintive Cuckoo, Grey-winged Blackbird, Brown-throated Treecreeper, Rufous-bellied and Small Niltava and Orange-gorgetted Flycatcher.

Our last day was spent driving to the top of Pulchowki and descending part of it on foot. At the summit we were initially baffled by a large flock of Plain-backed Mountain Finch and a Redstart, possibly White-throated, rarely seen in the Kathmandu Valley, relatively few new species were seen on the way down but Orange-flanked and Golden Bush Robin were recorded and Green-tailed Sunbird were fairly common. The last site of the trip was Godaveri Botanic Gardens with similar species to the previous day with the addition of Speckled Piculet and Red-billed Leiothrix.

The total for the whole tour was over 300 species but I have only noted those that I personally saw and a few observed by other members only. The pace was quite relaxed and only rarely did we chase after single species, as with Ibisbill. For English names in the species list I have followed fairly closely to the Guide to the Birds of Nepal (2nd Edn) by Carole and Tim Inskipp, but I realise that problems will arise, especially for tour participants and others who will be more familiar to the names given by the late Salim Ali in his literature of the region.

Throughout the tour we received invaluable assistance from a Nepalese birder, Bijaya (BJ) Amatya and I would like to recommend anyone visiting the country for the first time to contact him at Yeti Travels, Durbar Marg, P.O. Box 76, Kathmandu or Fax on 00977-01-226153. His knowledge of Nepalese birds is extensive and he will be glad to assist anyone planning a trip there.

Thanks to the organisation of the tour-group Spencer Scott Travel, Yeti Travels, the other tour members, the plentiful Nepalese wildlife and the reasonable weather the tour was a resounding success, none of the participants received more than minor ailments and we encountered nothing but hospitality (apart from some minor pilfering at one site.)

The tour gave me a taste for Nepalese birds and I hope I can return in the not-so-distant future, and search for the plentiful species which we missed on this occasion.

Recently I have received some excellent newsletters regarding birding in Nepal (Danphe-Bird Conservation in Nepal), See the Koshi Camp website on http://www.koshicamp.com  anyone planning a trip there or just interested in the wonderful avifauna of the country should contact Hem Sagar Baral at birdlife@mos.com.np